In Geiger-mode lidar, exquisitely-sensitive avalanche photodiodes (APDs) detect single photons and record their time of arrival with sub-nanosecond accuracy. This sensitivity allows our systems to operate at much higher altitudes (>30 kft) and thereby survey larger areas in a single overflight. Thousands of these sensitive detectors are combined into an imaging array.  3D scenes are measured at higher quality and at vastly higher measurement speeds. Systems built around these large arrays of sensitive detectors allow 3DEO® to provide 3D images of client sites more quickly and at significantly lower operational costs than any other technology on the market today.

The image below, courtesy of MIT Lincoln Laboratory, indicates the operational physics of these Geiger-mode APD arrays. Incident photons generate carriers in the absorber region, which then drift into the avalanche region. They are accelerated and knock more carriers into the conduction band. The device capacitance has been charged so the electric field across the APD is a few volts above the so-called "breakdown voltage". The avalanche gain is then greater than the recombination loss, and the cascade process accelerates. As charge is depleted the voltage falls below the breakdown voltage, and the current stops. The multi-volt signal that results from a single photon detection is used to trigger standard CMOS logic circuitry, which records the precise time at which the event occurred. These timing circuits are simple enough to fit behind every pixel.

The result is an imager that detects single photons and records their time-of-arrival with 500 ps or better resolution. 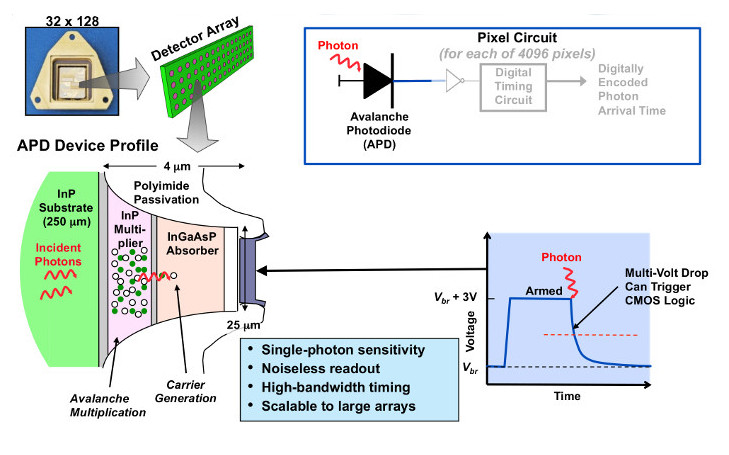